Posted November 23, 2013 by Kathryn Tonges
On the 19 th of October my best friend, Alexine,  from when we were so little that I can’t ever remember our age , came to Melbourne to visit me in Australia. 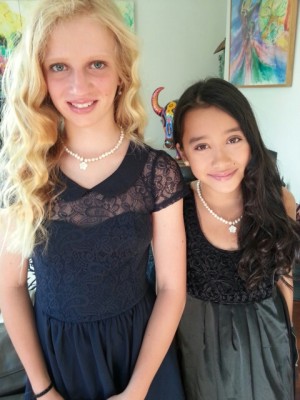 Diana & Alexine wearing their friendship necklaces Alexine's mother bought for them when Alexine departed Beijing when they were 7 years old.

We had a lot of fun together , and the good thing was we still had a lot to talk about even though we hadn’t seen each other in ages .
We did many fun activities such as going to Luna Park (an amusement park) , the beach , Puffing Billy ( an old steam train ) and others. 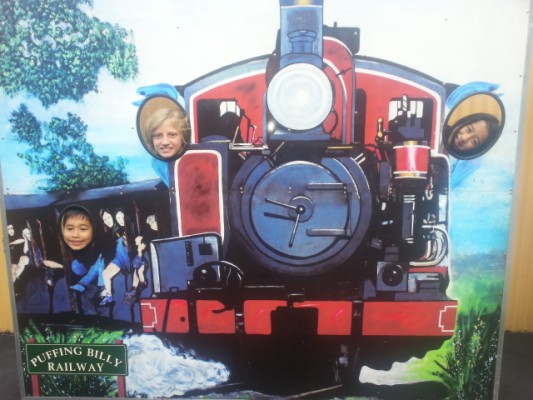 Diana and Alexine, and Alexine's brother Tristan, on the day they went to Puffing Billy in the Dandenong ranges outside Melbourne.

We had many laughs and we were very happy to see each other.
She also was able to come to my school for a recess which was a lot fun for her since she was able to meet my friends who all thought she was really nice .
I was lucky enough that she came a couple days before my birthday , which meant she was able to come to my birthday party at Bounce (a fun trampoline party place) and see  my friends again which was so much fun !
Sadly on th 3rd of November she left Australia to go back to Singapore.
We had a lot of memories together , and a lot of laughs ,
and I hope to see her soon in Singapore !
Diana Hipgrave  (aged 11 )
This entry was posted in Blog, Events, Fun Corner, News and tagged best friends, Diana & Alexine, Missing Alexine, Slurping Soup & Other Confusions, TCK's, Transitions. Bookmark the permalink.